These three words describe three graphic novels about the Middle East that I recently read. Actually only two are novels, the third, Mike’s Place, is best more like historical fiction. Each book completely engages the reader via stories that are smart, fun, entertaining, interesting and challenging. 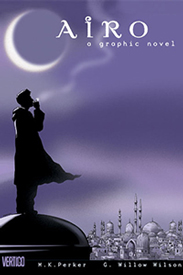 In Cairo: a graphic novel, written by G. Willow Wilson, with excellent art by M.K. Perker, and lettering by Travis Latham, is at heart a mystery with a multifarious cast of travelers, miscreants, magicians, Djnns, and other mythological beings meeting in modern-day Cairo to all search for a very unique hookah. One of my favorite characters is a young Israeli woman soldier who refused to serve in the Occupied Territories, so she was sent to the southern border with Egypt (not a popular assignment). On leave, she heads to Cairo where she hooks up with this group, and provides a crucial role (besides being a love interest of one of the Egyptians). 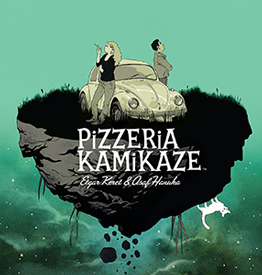 Etgar Keret’s Pizzeria Kamikaze is a mystical, surreal romp through an afterlife for people who committed suicide. It is not heaven or hell, good or bad. Actually, it is what the member makes of it. Although all in all it is a pretty crappy place to be, especially for the main character who meets up with an old friend from the ling and learns that his old girlfriend is there too. On his surreal search to find her, he has discussions about life, death, pleasure, pain and pizza. Keret is a master of O’henry type stories- short with a wallop. The late Amos Oz considered Keret one of the most important of current Israeli writers. 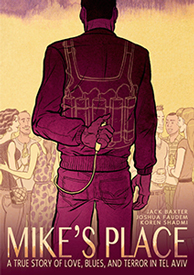 The Second Intifada (2000-2005)  was a terrible time of fear, pain and tragedy for the Palestinians in the occupied territories and the Israelis in their cities that led to an increase in military actions by the IDF in the territories, and as well as a series of horrific bombings by Palestinian bombers in Israeli cities.  Yet, in spite those tensions and violence there were still islands of sanity where all sorts of people- men, women, Moslem, Christian, Jew (you get the picture) could come to work, relax, have a beer, share some laughs with friends, play and listen to music. Basically have fun and escape. Mikes Place by Jack Baxter, Joshia Faudem, and Koren Shadmi (and is) one of those places, and this is the true story of  the 2003 bombing, perpetrated by two British Muslims that killed 3 and injured more than 50. It was a horrible event, but it did not cause the Mike’s Place family to break apart- they all came together to support each other and to continue to work for peace.

In reading history and current events, I find that surreal, mythical, and tragic also describe the Middle East in general.