The long and winding blog

Today I was downtown and bumped into a friend who is an adjunct in education at USC. We had not seen each other in awhile, so after some catch-up, we returned to our ongoing dialogue about education. It seems that over the summer, he has been consulting for the LAUSD. One of the areas of his work is to help teachers to recognize the many practical applications for the classes and theories that the students are exposed to and try to learn. We agreed that for lots of reasons, teachers do not always get the opportunity to do this, and also for many reasons, students do not always understand why they need to learn a particular subject. We both agreed that one of the main reasons that hinder students is the lack of context of the material- it just sort of stands out there with no real, and personal meaning. Creative teachers understand this and try to present content in a contextual setting that helps engage students in learning and understanding. Sadly, there are many creative teachers who cannot really do this because of core curriculum guidelines, standardized curriculum and testing, having a lot of students with no assistance in their classrooms, as well as other reasons beyond their personal control. But these issues are for another time, and another rant.

After we parted, I continued on bus and bike on my journey home, and continued to reflect on the the issues of providing context in the classroom, theory and practice. One of the ideas that always comes to mind when I contemplate these three issues is Gardner’s work on multiple intelligence. People learn different things in different ways. Some speak and understand the language of math, others history or language, others art or music, or sports or any of the other types of intelligences identified by Gardner.  This does not mean that because a person understands one or more things in a natural, relatively easy way, while struggling with others that they lack the ability to learn. It just means that they speak certain “languages” naturally, while others, well not so. For example, I am a natural liberal arts kind of guy- history, literature, art, philosophy and things like that. Some sciences too. But math was the bane of my existence throughout school. As far as I was concerned, my teachers all spoke Martian (with the exception of my 10th grade algebra teacher who knew how to teach to students like me.  Math was all theory for me, which was difficult for me to understand and contextualize. But things happened, I was exposed to practical math, and I began to understand. 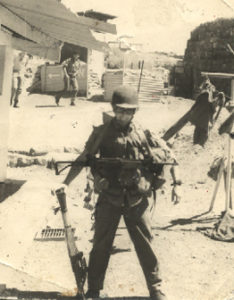 The first time that I realized that I could understand math was after I was drafted into the Israeli army (another long story). I was sent to an infantry unit, where I walked and walked and learned distance in kilometer (lots of kilometers), which I learned to convert into feet and miles (lots of miles). Learning range and distance is a critical skill, especially after I was assigned to 81mm mortars. I was exposed to range, distance, ballistics, arcs, and more, and in a practical setting. I learned and understood so well, that I became a trainer to both regular soldiers as well as officers, teaching both theory (including exercises using more complex algebra, geometry and even a bit of trig).  Later, after returning to the US, I worked as a house framer, where the need to understand math was again critical. But I learned. It is easy to see the difference between school and military and carpentry. In school, I was exposed only to theory, with no context. In the military and carpentry, I was exposed to the practical application of theory, or the context. It made sense. The same thing happened when I was learning how to read topographical maps- the theory made little sense, but in the field (especially walking lots and lots of miles), it made sense.

The  questions then arises about how to contextualize content as much as possible in classrooms that often have a strict set of one-size-fits-all learning guidelines? Two of the methods that provide both an answer and a process are Project-based learning and constructivist learning. And both can provide different contexts to address the different needs and abilities of all of the students.

One example that came to mind today was a project that I put together when my son was in primary school and I was working as an instructional technology analyst at Loyola Marymount University. I learned from my son’s teacher that they besides having old, and out of date computers, there was no time to really present the dinosaur module in class because of time constraints caused by the administrative need to prepare students for standard testing, and the lack of teachers’ assistants in the classroom. I started a conversation with the classroom teacher, my supervisor and some of my colleagues to develop a solution, which we did. Once a week for about 6 weeks, three of my colleagues and I would gather 5 or 6 laptops, go to the school and lead a project-based learning module about dinosaurs and computers.

We approached the students and told them they each of them was an expert on dinosaurs, and that they were about to research and present on their favorite dinosaur questions. We introduced them to basic research on the web (guiding them to age-appropriate web sites), then showed them how to capture images, and place images and text in a PowerPoint presentation. They chose the questions, images and wrote the text. We also provided a video camera and instructions on how to use it (most had already learned at home) so that they could video interview each other for their assignments. Everything was contextualized- they learned what they were interested in, helped out their friends, learned how to make a presentation, all based on dinosaurs.

At one point, the district computer guy, who went around teaching at different schools, heard about and got excited about the project, so he came to one of the sessions to teach the kids computers. Sadly, he did not have a good time or do a good job. He approached this lesson by focusing only on the computers, without any meaning or context. The kids were not interested, did not pay attention, and drove him a bit mad. He later complained to me about the lack of discipline, somethings that my colleagues and I did not experience. There were several actions and activities that he could have done that would have better engaged the students in learning computers and dinosaurs, the main one being to contextualize the content, and make it personal. In other words, to do what good teachers always strive to do. 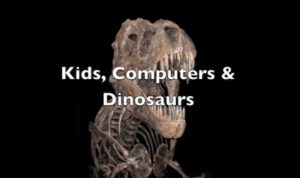 The title image of the kid’s movie!

By the way, the project was a success. I edited all of their presentations together, made a movie so that each participant would have a copy of their work, and the teachers, principal, parents and especially the students all love it (and the students had the extra benefit by learning about dinosaurs and computers.

(And I did not even mention graphic literature, although there are lots of parallels. But that is for another blog…)

Well, here I am late again. I really am trying to post a blog every Sunday night, which I usually do. But the digital dog at my virtual homework, or in this case, there was a glitch in my blog’s host, and I could not access the admin page. All is well now, so stay tuned my faithful followers to next Sunday’s blog! And thank you for reading!